Minister of National Education Mahmut Özer got together with the students of the Anatolia Primary School in Mamuşa district of the Republic of Kosovo where the Turkish population lives during his official visit to the country.
﻿ 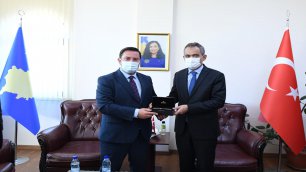 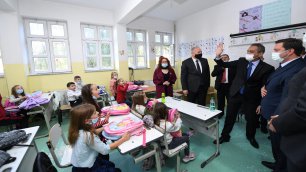 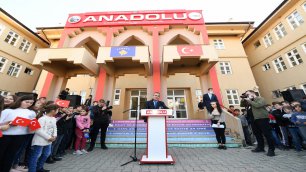 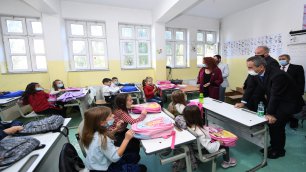 Özer was welcomed with Turkish and Kosovo flags at the Anatolia Primary School in Mamuşa.

Minister Özer expressed his happiness to visit the school which is the symbol of Turkish presence in Mamuşa.

Noting that his Ministry will continue to support the Turkish people living in the district, Özer said, "Ministry of National Education of the Republic of Turkey will continue to give all kinds of support varying from infrastructure to training programs of teachers, from textbooks to training materials for schools in Mamuşa."

Özer stressed that Turkish presence in the district formed the foundation of friendship and created a solidary bridge between the two countries adding that, "We do not consider ourselves as guests in a foreign land. We are here to visit our brothers. Excitement in the eyes of children took us to 500 years ago. We see our common history and culture in the look in their eyes."

Meanwhile, Kosovo Minister of Regional Development Fikrim Damka said, "Support provided by our homeland especially in education yielded results today. We continue to see the outcome. Any support given to children is an investment to the future. Our homeland never hesitated to give support to our future and I have no doubt that they will continue to do so in the future."

Mamuşa Mayor Abdülhadi Krasniç stressed that residents of district considers came from Tokat province of Turkey and thanked Turkey and Turkish agencies for supporting the Turkish community in Kosovo.

Özer chatted with students of the school and gave them bags as gifts.

Following his visit, Özer had a meeting with the mayor and other officials in the Mamuşa Municipality.

As a part of his visit to Kosovo, Minister Özer went to Prizren city. He visited Motrat Qiriazi Primary School and chatted with teachers.

Addressing the ceremony in which students recited national anthems of both Turkey and Kosovo, Minister Özer stressed the school is giving education in three languages, Turkish, Albanian and Bosnian.

Noting that the relationship between Turkey and Kosovo is gradually getting stronger, Özer said, "Turkey is taking important steps to  establish cooperation with Kosovo in different fields such as education, culture and tourism and support Kosovo".

Özer said that like it happened in the past, his Ministry will continue to give support to Kosovo for increasing the quality of education in the country and improvement of vocational education.

Özer got together with Turkish teachers at the Kosovo Turkish Teachers' Association in Prizren.