Minister of National Education Mahmut Özer took an oath at the Turkish Parliament.
﻿ 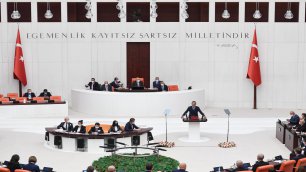 The first session of the new legislative year of Parliament convened under the leadership of Speaker Mustafa Şentop.
Following the speech of President Recep Tayyip Erdoğan on the occasion of the opening of 5th legislative year of the 27th term of the Turkish Parliament, the assembly was adjourned.
Deputy Parliament Speaker Süreyya Sadi Bilgiç reopened the session and the Presidential Decree on the appointment of the Minister of National Education was announced.
Bilgiç invited Minister Mahmut Özer to the General Assembly to take his oath.
Minister Özer's spouse Nebahat Özer and daughter Zeynep Özer watched the ceremony from th guest chamber of the Parliament.
Upon the decision of deputies, Deputy Parliament Speaker adjourned the session until October 5, Tuesday.
Click to watch the video.

20th NATIONAL EDUCATION COUNCIL CONVENES WITH ALL OF ITS STAKEHOLDERS

The Ministry of National Education is taking new steps in an effort to expand preschool education. At the beginning of November, Minister [...]

STUDENTS OF IMAM HATIP SCHOOL IN BURSA WILL GRADUATE WITH AN