"NO SCHOOLS WITHOUT LIBRARIES" 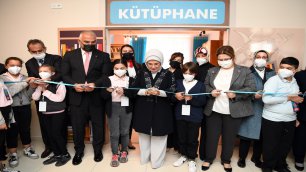 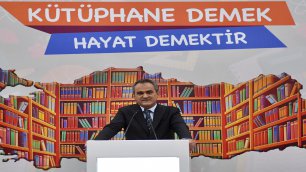 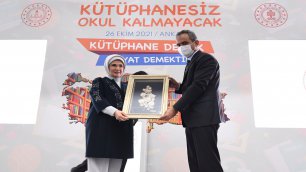 President Recep Tayyip Erdoğan's spouse Emine Erdoğan said in her speech at the launch of the "No Schools Without Libraries" project of the Ministry of National Education organized in the Yenimahalle Şehit Öğretmen Mehmet Ali Durak Secondary School that the project is "good news for everyone."

Citing the true story of secondary school student William from the Republic of Malawi during the great hunger in 2001, Emine Erdoğan reminded that William continued to go to library when we had to dropout school due to poverty and became an inspiration for the entire world when he designed wind turbines that generated electricity and pumped water by using his knowledge obtained from the books.

Emine Erdoğan stated that this story reveal the life-changing benefits of libraries and went on to say that:

"Libraries are an essential need of people of all ages. Every development we see around us has happened as a result of people's curiosity to learn. The breath-taking journey of discovery, from the first steps of humanity to space adventures, is the product of this curiosity. What makes this journey continuous is that people have entrusted their experiences to the memory of libraries. Therefore, books are, in a sense, instruments that enable intergenerational communication."

"No matter how the world changes, place of libraries in our lives are essential"

Noting that history of libraries goes back to ancient times, Emine Erdoğan said:

"In this era when we witnessed digital transformation, libraries are neglected for a certain period of time due to the delusion that the internet can answer all questions. No matter how the world changes, the place of libraries in our lives is essential. Today, the global transformation of libraries is exciting. Now, libraries are no longer museums of books with dusty shelves, they have turned into the center of attention with digital collections and activities that interest all ages and groups. Moreover, libraries are the hearth of education and school. I believe that this project will help this heart to beat stronger."

"A child entering library is a reason of happiness of librarian"

Emine Erdoğan said that the Nation's Library reflects the new face of libraries with its rich collection and researchers, students and readers of all ages are benefiting from this library.

"I would like to address parents. Let's introduce libraries to our children at an early age. I believe that a child entering library is a reason of happiness of librarian," said Ms. Erdoğan.

Noting that education was among the worst affected fields due to hard conditions of the pandemic, Emine Erdoğan said that teachers became the symbol of sacrifice during this period.

Noting that human capital plays a crucial role in the development of countries and increasing welfare levels, Özer stated that education is the main factor in increasing the quality of human capital.

Özer stressed that Turkey achieved important progress in education since 2002 under the leadership of President Recep Tayyip Erdoğan and went on to say that:

Minister Özer reminded that they have started a new project under the auspices of Emine Erdoğan about preschool education which is crucial for providing equal opportunities in education.

"Ministry of Culture and Tourism will provide books"

"We have allocated funds to schools. Purpose of our project is to teach reading culture to students in order to prepare them for life and future as thinking and asking individuals. The Ministry of Culture and Tourism will assist us to provide books for these libraries," he added.

Minister Ersoy: Number of museums, libraries, art centers and exhibition halls will be increased in order to include youngsters to world of culture and arts

Minister of Culture and Tourism Ersoy mentioned the new perspective that blends education to culture and considers these two basic elements as inseparable and stated:

"Our main goal is to provide our young people the opportunity to reach cultural and artistic activities organized in all parts of the country. Number of museums, libraries, art centers and exhibition halls will be increased in order to include youngsters to the world of culture and arts. We will introduce Yunus Emre, Yahya Kemal, Ahmet Hamdi Tanpınar, Osman Hamdi Bey, Münir Nurettin, Neşet Ertaş, Turgut Cansever and Nuri Bilge Ceylan to our students. If we reinforce the relationship between culture and education, we will also increase the level of quality of education. Due to this reason, we prioritize this project."

Ersoy added that the Ministry of Culture and Tourism will give all the support in their power to establish libraries in all schools of the country.