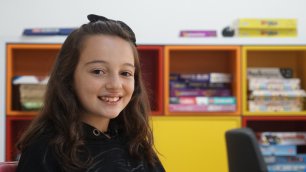 13 year old Nilda had to stay away from games she used to play with her friends in the digital design, game and animation workshops and helped them to improve their analytic and cognitive skills during the pandemic. During the distance education, Nilda rolled her sleeves in order to design a game application after consulting her idea with BİLSEM administrators.

Nilda worked for a year with her university student cousin for the design of the game which includes information about Turkey and the World by using story technique. Nilda İçmeli is working on final updates with her teachers before launching her game in the Android and IOS markets.

Parents can be comfortable letting their children play her "Atlas Game" as it is based on knowledge. Game provides children the opportunity to improve their fast and analytic thinking skills and learn facts about countries of the world. Application will be free in Android and IOS markets.

"I want to digitalize the games I could not play with my friends in the center during the pandemic," said Nilda and gave following information about her interest about mind games:

"I missed mind games most during distance education. I did not like to play them alone at home as there was no interaction. So, I decided to digitalize the games we played with friends. I mentioned my idea to the principal, and he liked it. Then, we started to develop the application with my cousin İrem."

İmam Hatip student Nilda stated that her goal was to design a different game and make contribution to humanity adding that, "Atlas Games include 15 different games that improves practical and analytic mind. It also includes cultural information about Turkey and different places on Earth as well as space and scientists."

Nilda said that she worked in order to complete the design and software of the game for one year and she was sure that the Atlas game would catch the attention of many people.